This is probably hopelessly outdated, but back when I was more up to date with the hot new programming paradigms and the like, people liked talking about “web stacks,” with the archetypal one being LAMP. At the bottom you had the operating system (Linux), then the server software (Apache) on top of that, then the database software (MySQL) on top of that, and then the programming language that you write the site’s code in (Perl/Python/PHP, depending on your preferences) operating over everything.

The vertical metaphor is useful for pretty obvious reasons. You can’t get much done writing a website with a given language without data in a database for your code to play with. There’s no point having the data on a server without server software with which to make it accessible to users. And you can’t run anything without your OS underneath it. Each layer needs the layers underneath it to do any work.

Very few people this side of Kant lay out a full stack, but Cornell Realists like Richard Boyd and Nicholas Sturgeon come pretty close. At the very bottom you have metaphysical naturalism: what exists is the natural, physical world as described by modern science. Epistemologically you have some kind of reliabilism: you are justified in believing what reliable processes (to whit, the scientific method) lead you to believe. Methodologically, you have scientific realism: science is the best means of acquiring knowledge. And then you have naturalistic utilitarianism on top of it: you should do what maximizes the good, and “good” is just the natural fact of maximizing utility. It looks sort of like this: 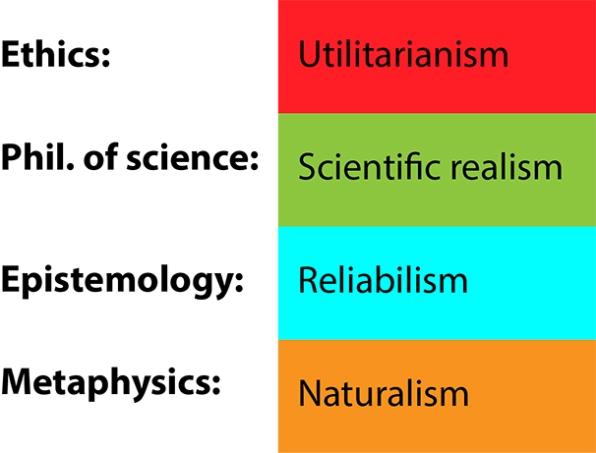 I don’t presume to speak for anyone but me, but this is certainly how I have usually thought about philosophy. And I’m starting to think, for reasons I touched on two years ago here and in part as a result of mulling of Matt’s response, it’s kind of mixed up. There is no necessary reason for the stacking to go in that order. Indeed, it might make more sense to make value theory foundational. 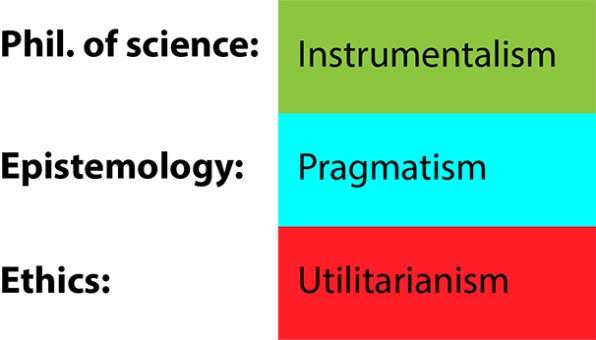 Instead of starting from the foundation of naturalism, someone who accepts this stack starts with his ethical theory — in this case utilitarianism, for ease of illustration — and moves from there. The question “what beliefs are justified?” is rephrased as “what ought I believe?” and so out comes a kind of pragmatism (“one ought to believe whatever beliefs maximize utility”) as one’s epistemological theory. And out of that comes an instrumentalism about science; it’s a tool for figuring out what’s best to believe, not a means of access to a mind-independent reality. And as for metaphysics — whatever! You don’t really need it. You have a pretty coherent picture of what one should do and believe and think about the world without getting into ontological matters.

The obvious objection here is, “But how do you know utilitarianism is true?” From the perspective laid about above, however, this reply is sort of confused. Utilitarianism isn’t something you can know. It’s a precondition of obtaining knowledge. If to “know” something consists in believing what you ought to believe about a given subject, then you can’t explain how you know something without making reference to an underlying ethical (or at least normative) assumption about what’s best to believe.

You can think about this as a kind of fideism about ethics. Just as theological fideists don’t think that it’s necessary or even wise to come up with reasons for believing in God, on this view you can’t come up with reasons to believe one ethical doctrine or another. All you can do is take your stand and see what follows.

I don’t necessarily buy this view, though as you can probably tell I’m quite sympathetic to it. And one reason for that is that it avoids a difficulty that my previous post was trying to identify in the Cornell version of utilitarianism. On Boyd’s view, the answer to “should I perform action A?” is always “you should if A maximizes utility” except if action A is of the form “hold belief X”. Answers to questions like “should I hold belief X?” are more like “if belief X is verified by scientific methods and corresponds to the mind-independent world.” But why should this kind of question and only this kind of question be exempt from utilitarian reasoning? Isn’t it simpler to just junk the separate epistemological theory and start with the ethical theory as a foundation?

Steve Petersen makes a persuasive case along these lines from an act utilitarian perspective here. As Petersen says, the burden of proof should be on value pluralists to explain why epistemic value is special and deserving of its own treatment apart from all other kinds of value. This challenge is particularly grave if, like Cornell realists, you think that epistemic value is the only exception to your view that one kind of value holds for all things.

P.S. Paul Kelleher, who unlike me is an actual philosopher (with a PhD from Cornell, no less!), notes that it’s probably fairer to characterize the Cornell folks as non-utilitarian consequentialists. D’oh. In any case, I think the above critique still applies.